We've released Mail Designer 1.2 this week – a fairly substantial update that adds a huge feature that we've had a lot of requests for...

Now you can take any design and export it as a HTML document, so you could re-use your design with other newsletter services, or offer a preview of your newsletter to visitors on your website. 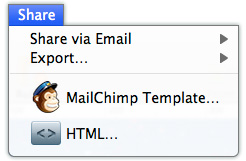 Mail Designer 1.2 also has lots of other improvements – we've made it easier to duplicate layout blocks, improved compatibility with Outlook, Gmail and Thunderbird, added three new layout blocks with bullets and more.

Get the Mail Designer SDK

We've also announced a brand new SDK for Mail Designer. The SDK allows developers to create their own plug-ins that are seamlessly integrated with Mail Designer. In fact, even our new HTML export feature was created entirely using the SDK.

How to build email newsletters that look great in all versions of Outlook – with Mail Designer Pro 3.3