Chopsticks at the ready

Have you ever wondered how they use chop sticks to eat ribs in Japan?

During his frequent trips to Asia, equinux CEO Till often wonders how equinux apps might fare in the Japanese market. As a company based in Germany and the US and with little experience of Japanese culture, we knew our best chance of success would be to find a Japanese native speaker. With a new team member on board, we started work on preparing Barbecue for the iPhone and iPad, Japanese style! 日本語の記事はこちら(^_-)-☆

It quickly became clear that the concept of a barbecue was very different in Japan compared to our own experiences. Whereas barbecuing is often a weekly or monthly affair in Europe or the US during the summer, Japanese families might only barbecue every couple of years when camping. Alternatively, they would head to a restaurant and enjoy Korean style barbecue food. After reading our product descriptions for the apps, our Japanese colleague started asking the sort of seemingly obvious questions that actually make you stop and think:

"Why do you flame grill food?"

"Doesn't it go black and burnt?"

"Is 'the grill' the metal shelf, or the entire contraption?"

Questions unsatisfyingly answered, our Japanese colleague went away and localized the app for a Japanese audience. Like any localization, a simple translation was not enough. Indeed, why would a Japanese iPhone user want to use a knife and fork? We need chopsticks! 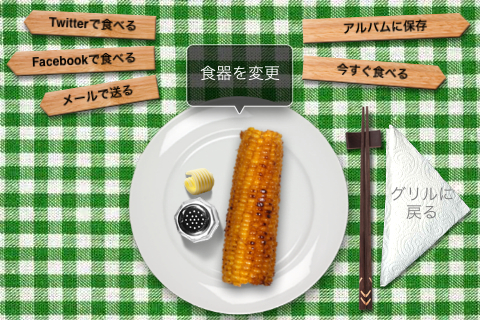 Suck it and see

Together with our art director, we found the right chopsticks for the sort of barbecue a family would enjoy on a Japanese riverside. Localizing an app in Japanese was a voyage into the unknown for the team. We had no idea how long sentences would be, or how fonts would appear in the app and on our website. Writing strings also takes a lot of consideration. Where in English there is one level of formality, there are two in German and at least three in Japanese.

Barbecue in Japanese went live a week after submitting to Apple. Having never marketed in the land of the rising sun before, we looked to create a list of journalists and bloggers active in the country. In addition, we tweeted a message in Japanese, as well as a targeted update for our Facebook fans based there. Updates like these can be a great way of testing the water for marketing an app.

We've been fascinated by the localization process, and have found it to be a reasonably smooth process. It's always however fascinating to look at your own culture from an outsider's perspective. We believe we have a lot more we to offer in the Japanese market, so stay tuned...

Barbecue is available now for the iPhone and iPad