As many of you already know, Apple announced that last year’s Macworld would be their last. After six great years at Macworld San Francisco, their announcement prompted us to re-evaluate this iconic trade show. Today we’d like to share some of our favorite anecdotes from the last six years as well as our reasons for not attending Macworld 2010.

Every year Macworld was a huge team effort. The entire staff worked through most of the holiday period to get everything ready – the new software releases, the booth materials, the live demos,.. the list goes on. A few days before the show actually started, part of the team from Munich would fly out to San Francisco and set up camp within our US office for the final preparations.

The first few years, our Macworld booth was very DIY. We usually rented a U-haul truck and headed over to Home Depot to stock up on plywood, supplies and tools. Once we had everything we needed, the next challenge was to move our equipment into the exhibition hall. Anything you want to bring into the Moscone Center needs to be weighed and union rules require anything that can’t be carried (not rolled!) has to be transported by union employees. Gotta love red tape!

For a few years a simple drape served as our booth backdrop,

until we upgraded to a solid wall (we called it our own “Berlin Wall”), which we decorated with vinyl stickers featuring our products. Such DIY comes with it’s challenges: the air conditioning in the exhibition hall was always ice cold during the day, but in the evening it would get fairly warm. This would cause air bubbles to form underneath the stickers, leaving ugly ripples on the wall.

We were known for giving out Ferrero’s Kinder Surprise eggs – which are apparently illegal to import into the US. We had to smuggle them in via Canada, but judging by the reactions from our visitors, it was worth it!

spend hours in the icy, highly air-conditioned exhibition hall setting up our booth until late at night. Once the booth was ready, we set up all the demo Macs and our booth network. Getting online at Macworld is surprisingly expensive: You can rent a connection, but connectivity for a single Mac cost between $1000-$1500 and you aren’t officially allowed to share this connection using a router. Of course in a hall full of nerds, nearly everyone did anyway. One year we even shared our wifi connection with the booth next to ours – in return they gave us some of their fantastic goodies at the end of the show (thanks again friendly booth neighbors!).

After Macworld 2007, it became clear that we needed to invest in a real booth: our Macworld team had grown to 10 people and we were spending far too much time focusing on logistical issues and booth-building. We decided to commission a professionally built booth.

Working with a team based in LA, we came up with a design that suited our needs and reflected our products best: the booth consisted of a presentation area, 8 modular presentation pods, a sales counter and a small storage room. The cost came as a bit of a shock, but we decided that if we were serious about going to Macworld, we had better do it right. All-in-all, including design, transport, construction and materials, our new booth cost about $150.000. But considering the time, effort and logistical savings, as well as the increased visibility, publicity and sales, it was a solid investment. 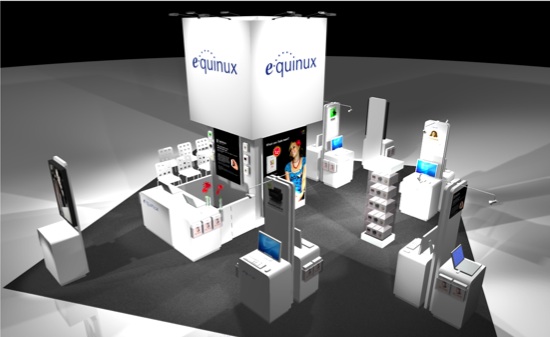 We look back at the show itself with a lot of fond memories. Sure it was stressful and chaotic at times, but we got pretty good at pulling it off over the years…

A fantastic part of Macworld has always been the opportunity to meet new faces, speak directly to our customers and be a part of the Apple community. We noticed that although the Apple community was growing, with millions of new Mac owners visiting Apple Stores every year, those new Apple users didn’t seem to be joining in the fun at Macworld.

Don’t get us wrong: it’s great to see familiar faces and one of the things we looked forward to most was meeting up with long-time users and fans who have been using our products since day one. But any trade show is also an opportunity to meet new faces and introduce products to new users and we get the impression Macworld isn’t where new Mac users go to check out new Mac products.

So where do they go? Well, as Phil Schiller pointed out, Macworld attendance is about the same number of people that visit an Apple Store every week. Mac users used to go to Macworld to congregate and check out new products, because there was nowhere else to go to get that hands-on experience – that’s no longer the case.

Will the press show up?

We have also spoken to a number of journalists, who indicated that they most likely will not be attending. Macworld used to be a great opportunity to launch new products, but if journalists choose not to cover the show, then there’s no point in trying to bend our release schedule in order to finish a product in time for Macworld.

Macworld has usually also been a great opportunity to meet with our contacts at Apple. We had assumed that even if Apple wasn’t going to have a booth, Apple employees would still show up and be available for meetings etc. However, our Apple contacts have told us they will not be attending this year’s show, so we would need to plan in extra time to visit Cupertino as well.

Let’s face it: trade shows are enormously expensive and Macworld was no exception. As the last remaining major Mac trade show, IDG knew they could charge premium prices and companies would gladly pay them for the opportunity to bask in Apple’s limelight. We had already made a major investment in our booth and other exhibition infrastructure in previous years, so those costs had already been laid out.

What about floor space cost? IDG is clearly worried about filling the show floor and we received an offer that was 50% cheaper than last year’s price. But just because something is cheap doesn’t mean it’s necessarily a good investment…

We loved being part of the Macworld these past 6 years. But the show can’t live on fond memories and nostalgia alone. We believe that this year it’s make or break for Macworld. If this show is a success, we’ll definitely be re-evaluating our options for 2011…

A Mac show in the US still makes a lot of sense. Perhaps we’ll see a revival, similar to the changes we saw in the Mac magazine space: New players such as MacLife, iCreate entered the market and were able to establish themselves as legitimate competition for the old traditional magazines.

P.S. Here are some pics & memories from over the years – good times!

The making of Mail Designer

equinux donates $3000 to the earthquake victims